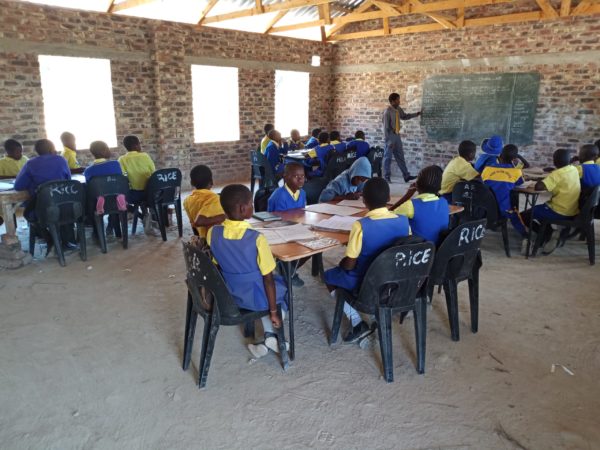 The CCAP started a primary and secondary school at Rock Haven

The Church of Central Africa Presbyterian (CCAP), Harare Synod is, true to its motto, indeed a living church, witnessing to the glory of God in very difficult circumstances. It sprouted from the CCAP in Malawi to form the fourth synod of the CCAP, the other synods being the Nkhoma, Livingstonia and Blantyre synods. The CCAP, Synod of Zambia was only established some time later. The CCAP, Harare Synod, was established more than a century ago among Malawian immigrants working on farms, mines and other industries in Zimbabwe.

Zimbabwe is a landlocked country, bordered by Zambia to the north, Mozambique to the east, Botswana to the west and South Africa to the south. The country is blessed with abundant natural resources and it has a very high agricultural potential; it was once known as the breadbasket of Africa. Due to severe droughts and the effects of land reform programmes, there has been a sharp drop in agricultural production.

The struggle for independence, land and power runs through Zimbabwe’s history. Veteran President Robert Mugabe has dominated the country’s political scene since the country’s independence from Britain in 1980. On 15 November 2017, in the wake of over a year of protests against his government as well as Zimbabwe’s rapidly declining economy, Mugabe was placed under house arrest by the country’s national army in a coup d’état.  On 30 July 2018 Zimbabwe held its general elections, which was won by the ZANU–PF party led by Emmerson Mnangagwa.

Cash-strapped and impoverished, Zimbabwe’s economy now faces severe challenges. Unemployment and poverty are endemic and political strife and repression commonplace. Many Zimbabweans have left the country in search of work in South Africa.

Harare is the capital of Zimbabwe. The country’s population comes to about 14 million. While 16 different languages are recognised and spoken in Zimbabwe, English, Shona and Ndebele are the languages spoken by most of the population. Christianity is the predominant religion while a small percentage of the population follows traditional indigenous beliefs. Approximately 92% of the young population is literate and, until recently, the highest percentage in Africa.

A church for migrant workers

Since 1903 thousands of Malawians immigrated to Southern Rhodesia, now Zimbabwe, in search of better employment opportunities. The CCAP, Harare Synod is a result of migrant workers from Malawi as well as the north-eastern part of Zambia coming to work on the mines, in industries and on farms in Southern Rhodesia. The spiritual need of the migrants was highlighted when, in 1905, a delegation of workers went all the way to Mvera in Malawi, covering a distance of more than 600 kilometres on foot, to request the services of a missionary. Mvera was, as already mentioned, the first mission station of the DRC in Malawi.

The different missionary organisations in Malawi took note of the request, but no missionary could be recruited. In the meantime,
the Presbyterian Church of South Africa, who was also working in Southern Rhodesia, started to minister to the Malawians as well. In 1911 Rev. T. C. B. Vlok, by then a well experienced Dutch Reformed Church missionary, already working for 23 years in Malawi, was so touched by the spiritual need of the migrants in Southern Rhodesia that he volunteered to go to work among the migrants.

When he arrived in Salisbury in 1912, he found a name list of about 230 catechumens there. He came to an agreement with the Presbyterian Church that he would work among the Chichewa-speaking people in Mashonaland and they would work in Matabeleland. Rev. Vlok thus worked as a representative of the Federated Missions in Malawi. He did a formidable task, working over a vast area as the only ordained minister among Chichewa-speaking migrants all over the country. By 1914 there were already 33 000 Malawians in Zimbabwe.

Rev. Vlok was assisted by evangelists from Malawi. He was replaced by Rev. J. Jackson in 1936 and in 1953 Rev. M. S. Daneel took over. Over the years, several missionaries from the Nkhoma and Livingstonia missions in Malawi as well as local ministers from Zimbabwe joined the work. Among them were Revs. A. M. Kuchona, J. Mlozi, J. N. Maseko, T. Chipeta, L. T. Tsitsi, J. N. Chimuto, J. E. Kalema, I. M. Banda, D. S. Mwakanandi and J. G. Juma.

Becoming an autonomous church, with a reformed identity

Currently, the CCAP, Harare Synod has four presbyteries, namely Harare, Highfield, Bulawayo and Gweru. The church has a total of 28 congregations and more than 92 prayer houses or preaching centres across the country. There are 22 ordained ministers. They also have 48 evangelists serving the Church. Although the membership has been much higher at one time, it now stands only at about 8 574. (This figure includes confirmed members and catechumens, but excludes Sunday school kids.) The Synod meets every two years. It has cordial, cooperative relations with the other Reformed Churches in Zimbabwe and abroad.

Ministries in the church

Young boys and girls from the age of 14 up to 25 years participate in youth activities. They gather on Saturdays for Bible Study, praying and other activities. Sometimes they visit the sick in hospitals and assist with manual work at the church. We have a minister who coordinates the youth groups at national level. This is a very important ministry whereby if not programmed properly many young people are lost and some join new prosperity gospel churches.

The Women’s Guild is the strongest arm of the church. They do charity work and participate in evangelism. They usually meet on Thursdays. Ministers’ wives are very much involved and lead this ministry.

A Men’s Guild was started recently.

We also manage two primary schools and one secondary school.

The church cannot escape the consequences of the current political situation in Zimbabwe. A very high rate of unemployment among its members, but also a lack of cash to buy anything, is a daily challenge. Many ministers often go without a monthly salary. The political situation in the country, together with increasing conflict, is very challenging. Many migrant workers lost their employment and they have had to seek alternatives.

People are now beginning to speak out. Ministers are also raising a prophetic voice. The issues they are raising are corruption, injustice, unemployment, poor service delivery and the disregard of human dignity.

Instead of facing extinction as the Malawian immigrants are displaced, the church focuses on contextualisation and reaching out to other cultural and language groups. They do not only use Chichewa in their congregations anymore but also Shona.

The church has adopted the slogan ‘breaking small to grow big’ to imply sharing whatever they have. They focus on empowering the different prayer houses and the training of evangelists to become ministers.

Another challenge is the prosperity Gospel and false prophets leading many people astray and some members from the mainstream churches are getting attracted and lost for the church.

The Church seeks to honour the Triune God by faithfully proclaiming the gospel, administering the sacraments and worshipping God in orderly liturgical services. They encourage holy living through responsible church discipline. Through its various ministries, the church strives to meet the spiritual, physical and social needs of the people as it reaches out to those as yet unsaved while also helping the needy in the society with justice and compassion. All of this is done in effective administrative and organisational structures.