The Nongo u Kristu u i Ser u sha Tar (NKST) 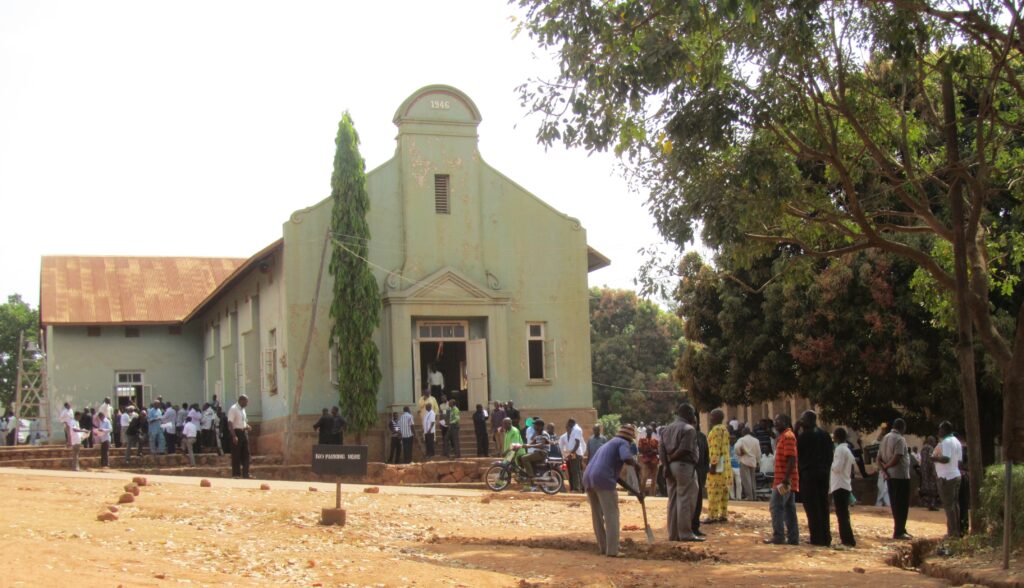 The church building at Mkar

The Nongo u Kristu u i Ser u sha Tar (NKST) or the Universal Reformed Christian Church is a vibrant, fast-growing church in Nigeria founded by the Dutch Reformed Church’s missionaries on 17 April 1911. The NKST is the dominant church among the Tiv people in Nigeria but spans throughout Nigeria and even into the neighbouring country of Chad.

Nigeria, the most populous country in Africa

The Federal Republic of Nigeria is situated in West Africa and surrounded by Benin, Niger, Chad, and Cameroon. Although Lagos is the biggest city, Abuja became the capital in 1991. As Africa’s most populous country with about 186 million citizens, Nigeria has 520 language groups. The official language is English. Christianity and Islam are the predominant religions. Tensions often arise between Islamic groups and Christian communities, for instance, during the recent offensives of the fundamentalist Boko Haram movement. The sporadic violent raids by the nomadic Fulani Herder-farmers on churches, schools and residences within NGST congregations have a devastating effect on the church.

The NKST originated among the Tiv, the fourth largest ethnolinguistic group in Nigeria with approximately 14 million people. In Nigeria, most Tiv speakers live in the states of Benue, Nasarawa, and Taraba. They depend mainly on agricultural produce for a living.

The gospel brought to the Tiv people

In October 1895, Dr Karl Kümm was called to start mission work in the Sudan Belt (formerly the sub-Saharan area north of the equator – from Senegal in the west to Sudan in the east). In the early 1900s, the international, interdenominational Sudan United Mission (SUM) was founded with a vision to create a Christian presence in Sudan.

In 1907 Dr Kümm visited South Africa at the invitation of Dr Andrew Murray. Consequently, a final-year theology student, George Botha, and a nurse, Miss C. M. Cilliers, announced that they had received a calling to go to Nigeria as missionaries from the DRC. Botha first received six months of medical training at Livingstone College in London. Before departing for Nigeria with Mr Hosking of the Wesleyan Methodist Church on 10 October 1908, they took Hausa language lessons together. Miss Cilliers joined them in 1909.

The South Africans started working among the Mbula people, but in 1910 the SUM decided that they should rather concentrate on the much larger Tiv tribe. In February 1911, George Botha and Rev. C. W. Guinter, a missionary of the SUM, discussed the location for a mission station with the Tiv chief at Saaiutu (Salatu) and the first mission station in Tivland was started at Saaiutu in April 1911 by Mr Carl Zimmermann. Benyamen Akiga, the son of Chief Sai, became the first Tiv Christian. 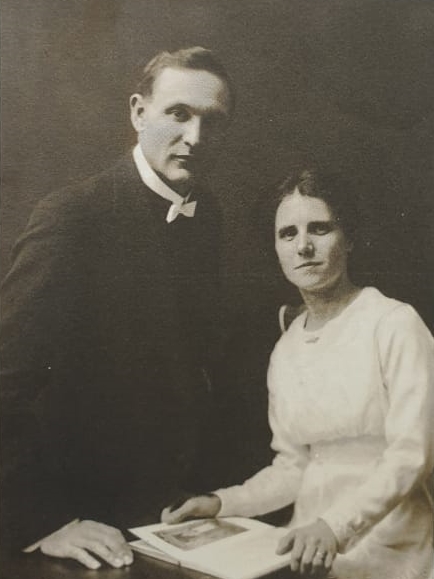 The number of missionaries in Nigeria increased, and between 1913 and 1935, mission stations were established at Zaki-Biam, Sevav, Mkar, Adikpo Kunav, Turan, Makurdi, and Mbaakpur. Rev. George Botha is regarded the pioneer missionary from the DRC to the Tiv people in Nigeria, although he worked under the auspices of SUM. Many others followed in his footsteps.

During and after the Second World War, 24 of the 34 missionaries returned home because of safety concerns. However, the church continued to grow thanks to the religious instruction and the support of the Tiv evangelists trained at Mkar. In 1935 the church had only 25 baptised members, but by 1941 they had increased to 214.

The NKST is established

The SUM officially handed over the Tivland Mission to the Dutch Reformed Church Mission (DRCM) in the early 1900s. In 1954 the missionaries began training Tiv pastors and evangelists in evening schools to establish an independent and autonomous church. The first four ministers were ordained just after the establishment, on 9 January 1957, of the Nongo u Kristu u Ken Sudan hen Tiv (NKST) or the Church of Christ in Sudan among the Tiv. They were Revs. Isholibo Sai, Ugo, Annum and Ayaka. The NKST then had 1,800 members, with 3,000 people attending Sunday services.

In the early 1960s, the DRCM had to leave Nigeria due to South Africa’s apartheid policies and their work was handed over to the Christian Reformed Church (CRC) of North America. By the 1970s, the NKST was considered the fastest-growing church in the world. Today more than a million people associate themselves with the NKST.

A holistic approach to the gospel

The NKST recalls that the mission, in their focus on evangelism, brought four ‘boxes’ to Tivland:

The NKST and its impact today

The NKST is a Reformed church holding to the three forms of unity: the Heidelberg Catechism, the Canons of Dort, and the Belgic Confession.

The NKST envisions, by the grace of God, to be a multi-ethnic Christian community, drawing in all nations and cultures of the world into its community. The NKST aims to be united in doctrine and purpose to provide a holistic service with the resources available to them to reach the unreached. Its mission is to glorify God through worship and the proclamation of the good news of salvation and to care for humanity holistically. 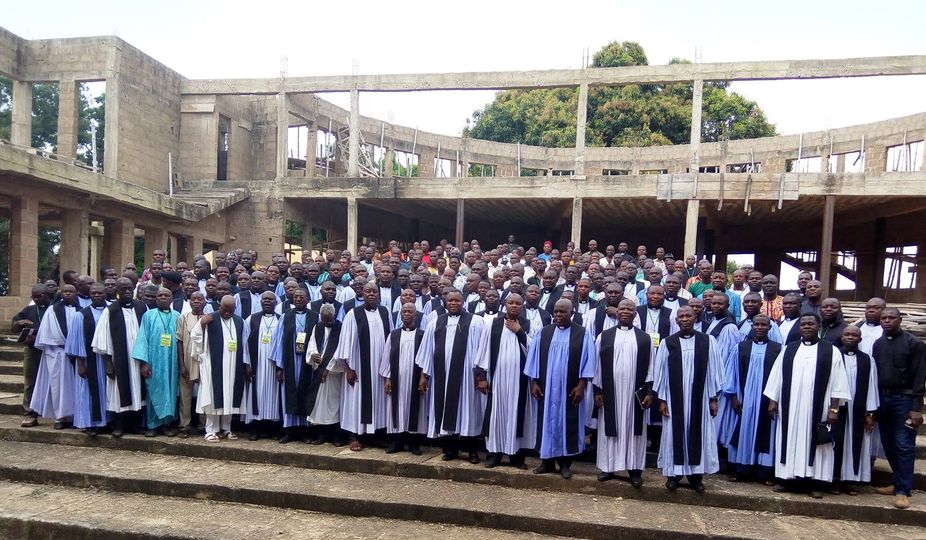 Delegates of the NKST at their Synod meeting in November 2017

The NKST has the following goals and objectives:

The NKST has a presbyteral system of church governance. The NKST Synod, which meets twice a year, is the highest decision-making body and is presided over by the president of the Synod. The NKST Synod has a seven-member executive council made up of the following offices: president, vice-president, general secretary, assistant general secretary and three appointed members. The headquarters, where the general secretary acts as chief executive, is at Mkar-Gboko in the state of Benue. There are sixty classis, 372 organised consistories, and 500 ordained ministers. There are about 700 evangelists and a followership of about one million people spreading across the world.

Financially the NKST is primarily supported by subsistence farmers. In order to render a holistic service to the people, the church has various departments focusing on health, education, literature, diaconal services, ministry to the youth, etc.

The NKST manages nine hospitals (with partners from the Netherlands) as well as four other health institutions in Mkar (the College of Health Technology, a school of nursing, a school of midwifery and the Lens Gabrieles School of Medical Laboratory Sciences).

Education has also been a significant part of the NKST’s achievements. The Tiv language was put into writing by the first DRC missionaries, and this opened great educational possibilities for the Tiv people. After developing the Tiv orthography, they translated the Holy Bible into the Tiv language, and the Bible was dedicated on 4 November 1964.

The NKST founded more than 500 primary schools and over 50 secondary schools. The Reformed Theological Seminary in Mkar has an extensive campus, and academic programmes extend up to master’s level. The University of Mkar was founded in 2005 to develop service-oriented students and a morally stable society. A Bible school for evangelists operates at Harga.

The current strained relations between Muslims and Christians in the northern parts of Nigeria call for a new emphasis on the gospel. The younger generation needs to be thoroughly equipped with Christ’s love to be able to act in love.

In 2014 a remarkable shift of focus took place in the NKST when the church changed its name to Nongo u Kristu u i Ser u sha Tar or the Universal Reformed Christian Church. The historical name was a hindrance to some because it implied the church was only devoted to the Tiv people. The new name indicates that the NKST wants to embrace all people into the one united body of Christ.