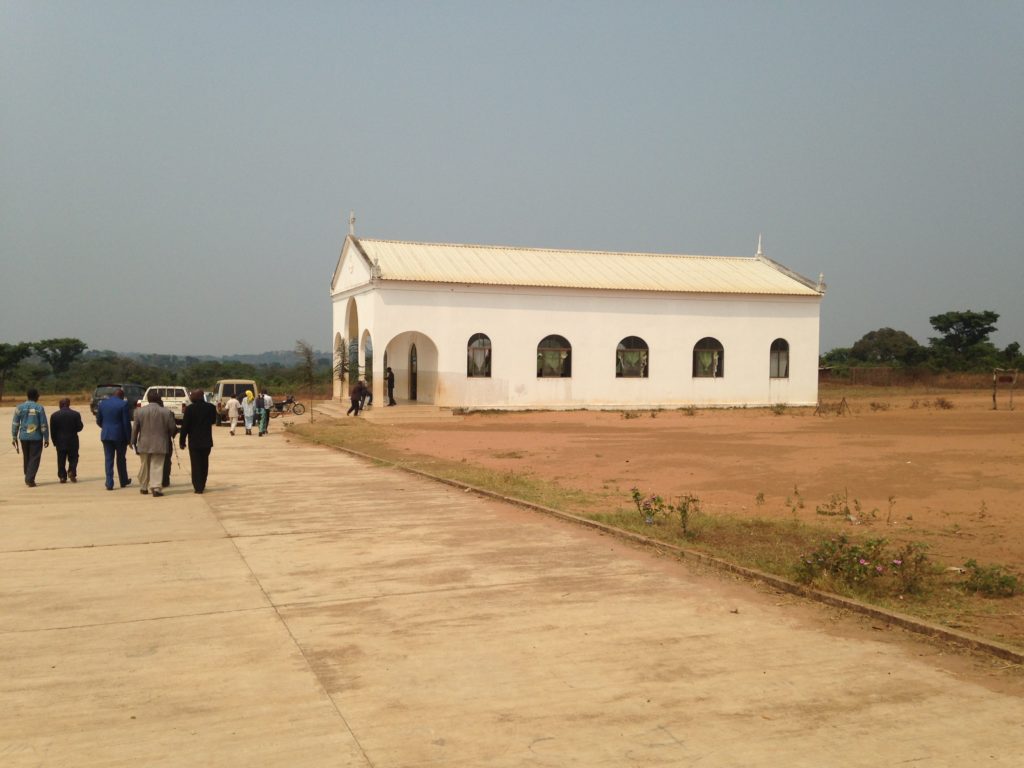 The church building at Kinkuni

Angola and the devastation of war

Angola is a vast country stretching along the western coast of Southern Africa and is one of Africa’s major oil producers. It borders Namibia, Zambia, and the Democratic Republic of the Congo. Following the withdrawal of the Portuguese colonial powers in 1975, former rival liberation movements plunged the country from independence directly into a bloody civil war that lasted 27 years. This war ended in 2002. While Angola is determined to heal the scars left by the war, separatists threaten to destabilise the country further by opposing the government in the oil-rich enclave of the Cabinda Province.

The Portuguese started to trade with the people of Angola in 1560. A sad history of exploitation, the slave trade, and corruption unfolded. The first Portuguese settlement was established in Luanda in 1575. Portugal colonised Angola in 1655 and formally incorporated it as an overseas province in 1951.During the 1950s and 1960s liberation movements were formed, but an uprising of workers undergoing forced labour on plantation set off clashes between the Angolan people and the Portuguese rule in 1961. The struggle continued until 1975 when the Portuguese left the country and Angola gained independence.

The MPLA gained control through the support of Cuba and the former USSR. Their rule was contested by UNITA, which was backed by the USA and South Africa, and FNLA that was supported by China. (It is noteworthy that the leaders of the three independence movements, MPLA, UNITA, and FLNA were all children of Protestant pastors!) Sixteen years of civil war followed until a peace agreement was reached in 1991. Elections were held, but UNITA was dissatisfied with the results and thus continued fighting until 4 April 2002 (almost two months after the death of Jonas Savimbi). From 1975 up to 1990, Angola was governed by one party and a centralised economic system. In 1991 it became a multiparty democracy with an open market economy.

The country is still struggling to heal the devastating scars left by the prolonged war. Cities need to be rebuilt, and the whole education system is in urgent need of restoration and reform.  Today, about 4 million children and young adults between the ages of five and seventeen years old are still not enrolled in the government’s education system. This is a tragic situation that hinders the country’s future growth.

The Roman Catholic Church has played a dominant role in Angola since the Portuguese arrived in the country. While statistical information varies, some sources estimate that about 50% of the population practice Roman Catholicism, while about 25% are Protestants, and around 25% practice indigenous beliefs.

The history of IERA

Due to decades of struggle and war, it is not easy to distinguish between denominational affiliations in Angola. People who were scattered during war formed new Christian fellowships where they stayed as fugitives, irrespective of denominational differences. Considering their grave needs and difficult circumstances, other priorities are more pertinent. Just owning or being able to read the Bible, for instance, became a challenge during wartime. But it is wonderful to see how the Lord nevertheless cared for his church during those difficult decades, and how the church has grown remarkably since the war ended.

IERA trace their origins back to the work of an Anglican layperson, Archibald Patterson (1899-1983), from the Low Anglican Church of St. Clement Parish in Liverpool. He started his work in 1922 in Kikaya, near Uige from where he moved to Sanza Pombo and founded the Kinkuni Mission, about 8 km from Sanza Pombo and 150 km from Uige city on June 6, 1934. He then moved to Kimbele on 18 May 1939 and founded the Kimbele Mission 250 km from Uíge city. Patterson and the Swiss missionary Ernest Niclaus, from the Evangelical Church of Bienne, are regarded as the founders of what is IERA today. Patterson invited other missionaries from the United Kingdom to help establish the church in Angola.

Archibald Patterson (1899-1983) from the Low Anglican Church of St. Clement Parish in Liverpool.

IERA was founded in 1922. Their seminary was built at Kinkuni in 1940 but was destroyed twice; first in 1961 by the Portuguese and again, after it had been rebuilt in 1978, during the civil war in 1987. Kinkuni became well-known for being a centre that offered training in skills, such as carpentry, shoemaking, blacksmithing, and farming. The centre also offered primary school education and training for pastors. These pastors also learned other skills and were called masters for their ability to teach the Bible and practice their trade wherever they served. The first Kinkuni lecturers to receive honours degrees obtained the qualifications at HEFSIBA ICHO, Mozambique with the support of NetACT. 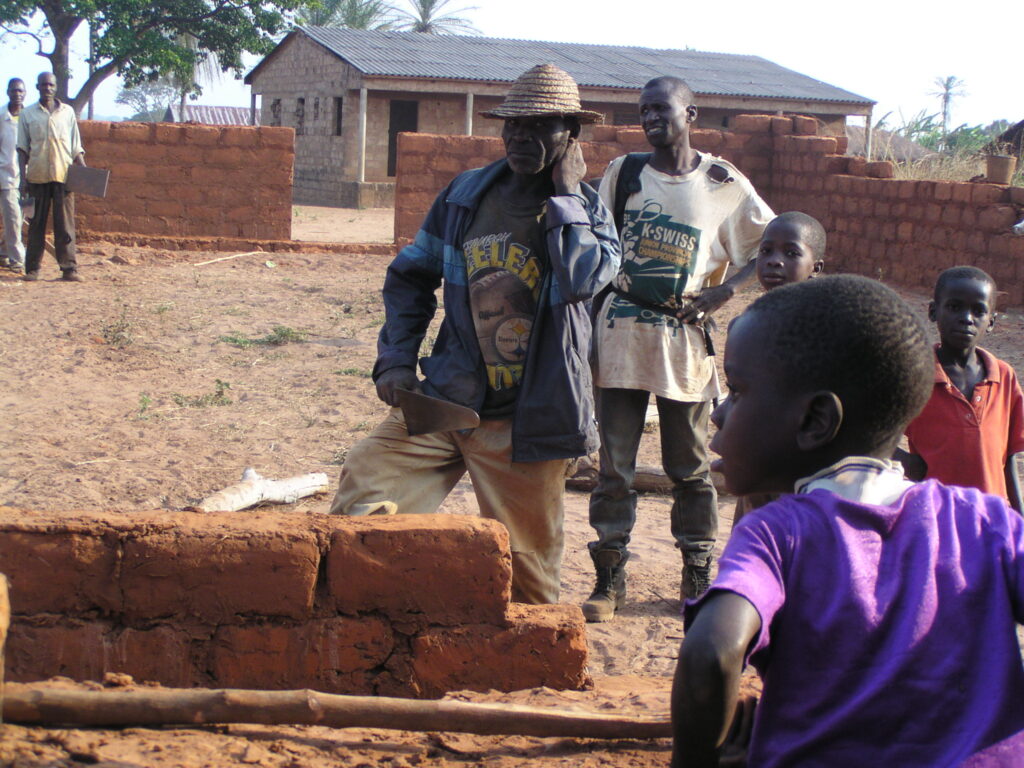 Relationship with the Dutch Reformed Church in South Africa

In 2004, two years after the end of the Angolan Civil War, a special relationship was established between the Dutch Reformed Church in South Africa (DRCSA) and IERA. A delegation for visiting churches and seminaries in Angola was formed and consisted of the following members:

Prof. Jurgens Hendriks writes about this visit: “The delegation wanted to reach out to these congregations and establish a link between them and IERA. The delegates were also eager to establish ties between the DRC and IERA. Although the roads were relatively clear from landmines, the average speed of the convoy was 40 km per hour over a distance of 4 000 Angolan kilometres. There was little left of the roads after the war; car wrecks indicated the direction for the delegation to take.

“In Luanda, the group met with the IERA executive and an agreement was reached and signed. The delegation visited Kinkuni where IERA requested their support to rebuild their seminary.” 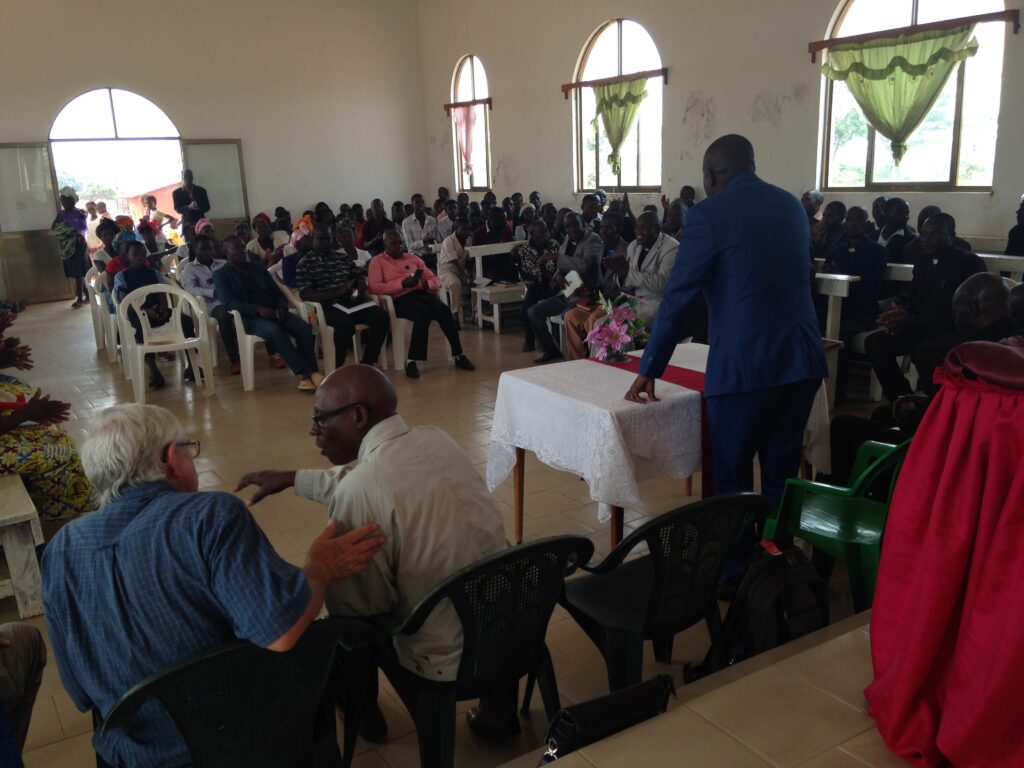 Kinkuni congregation members at a service

IERA has six provincial synods (Cabinda, Bie, Huambo, Luanda, Malange and Uîge), 666 congregations with a total of approximately 300,000 members and it is still growing. The church is active in 12 of the 18 provinces of the country. There are 409 pastors of whom some have had only primary school education and courses in biblical subjects as training. 80% of them are close to retirement. The pastoral ministry of IERA is open to women. There are currently five female pastors. Women are also present in the executive committee of the church, some of them as elected members, and representing the women’s organisation.

IERA has several departments, with the Development Department having the responsibility of implementing social development projects in the fields of education, health, rehabilitation of social infrastructures, relief goods distribution, vocational training, and food security. Agriculture is a priority project and has become a core curriculum component in theological institutions.

The highest priority should be given to the training of pastors. A goal was set to train 500 candidates in the near future. Until recently the training took place in the capital city of Luanda. It was however decided that the training will from now on take place at the Instituto Teológico da Igreja Evangélica Reformada de Angola (ITIERA) at Kinkuni in the Uige province as well as at the Seminario Emanuel do Dôndi (SED) situated near Huambo in the Huambo province of Angola. Rebuilding the centre at Kinkuni has become a joint project of IERA, NetACT, and the DRC. It is the most suitable place for a seminary for several reasons. It is in the centre of the vast majority of IERA congregations. In fact, 480 IERA congregations are situated in Uige Province. The seminary will be ecumenical in nature, especially for the Bakongo, Kimbundo, and Tchokwe people in this region of Angola and the neighbouring Democratic Republic of the Congo as well as the Congo Republic (Brazzaville). Luanda, where most of IERA’s theological training currently takes place, is an expensive and overcrowded city. Most IERA congregations are founded in rural areas, thus it is not ideal to train pastors in an urban environment such as Luanda. By contrast, training done at Kinkuni will work equally well for rural and urban congregations. True to the initiative of its founders, IERA is busy developing Kinkuni as a skills development seminary.

Another wonderful development that took place in Angola needs to be told. The post-war Angolan government sought to advance communism. Their first president (António Agostinho Neto: 1975-1979) said that they would get rid of religion within ten years after independence. He died five years later while the church, notwithstanding persecution, flourished. This Angolan government did not accredit theological training or degrees in Angola. But when João Manuel Gonçalves Lourenço became the president of Angola (since 26 September 2017), things started changing. President Lourenço realised the country needed to fight rampant corruption. In order to do that they need the church and theological accredited training.

By God’s grace, the Angolan government has officially welcomed theology as an accredited tertiary discipline.  The government’s Department of Education has asked a senior staff member to work with the ecumenical bodies in Angola to ascertain that the theological curricula are of a high standard. Two publications in which NetACT played a crucial role, were used as examples of high-quality handbooks. African Christian Leadership (the book is available in Portuguese, published by Langham in 2020), and African Public Theology (also published by Langham in 2020 with the Portuguese translation available by August 2022). The Dutch Reformed Church requested Dr Kruger du Preez to assist the Angolan theological schools with curriculum development in 2022 and 2023.

IERA is growing rapidly. After the war ended in 2002, several congregations were “discovered” in many provinces! Another example of the rapid growth is a thanksgiving service that was held in July 2021 in the city of Huambo for the approximately 30,000 new members of the provinces of Huambo and Bié who joined the IERA as the fruit of evangelisation outreaches and church growth.

IERA maintains relationships with the DRCSA, the Uniting Reformed Church in South Africa, the Protestant Church in the Netherlands, and the mission department of the Reformed Churches in the French-speaking part of Switzerland. Excellent relationships are also maintained between congregations in the south of Angola and the DRC in Namibia, especially through the work done by Rev. Jacob Schoeman.