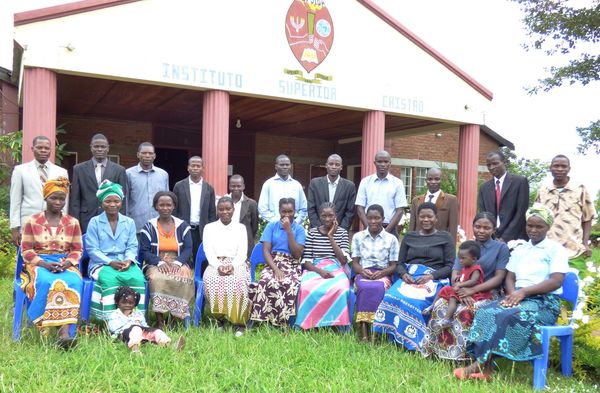 HEFSIBA with students and their wives in front of the main building, Mphatso Synod.

The Reformed Church in Mozambique, or Igreja Reformada em Moçambique (IRM), has undoubtedly an extraordinary history. The church was established despite much resistance and persecution. The first missionaries and evangelists sent by the Malawian mission commenced the work in 1908. They were only able to work for 14 years. The Portuguese government banned the church’s missionary enterprise in 1922 and persecuted Protestant believers. The small flock of young believers, about 342 communicants, was left without ministers or evangelists. Elders had to take care of the young church and its ministry. Fifty years later, when ministers from Malawi were allowed to resume the work, the flock had grown to about 4 000 people. That is why the scholar in the mission history of the DRC family, Dr J. M. Cronjé, referred to this remarkable phenomenon with the words: “a church born is cared for by the Lord.”

Mozambique, which has the longest stretch of coastline on the Indian Ocean, gained independence from Portugal in 1975 but is still suffering from the effects of a 16-year civil war that ended in 1992. Today, tensions between the ruling Frelimo (Mozambique Liberation Front) party and the former opposition movement, Renamo (Mozambican National Resistance), have not been fully resolved. Corruption has become a significant concern in the country. The discovery of gas fields off the Mozambican coast in 2011 has brought hope for economic transformation. The population is about 24 million people. The official language is Portuguese, but there are also several indigenous languages, including Chichewa in the northwestern corner that borders on Malawi and Zambia. The country is mainly Christian, with the Roman Catholic Church in the majority, but also with growing Pentecostal groups. About 17% of the population is Muslim, and a substantial percentage adheres to traditional beliefs or does not have any religion.

The churches, especially in the northern parts of Mozambique, are suffering from the consequences of the militant Islamist insurgency in the Cabo Delgado Province. This insurgency is also spreading to other areas. The jihadist group attempting to establish an Islamic state in the region is known by several names, including Ahlu al-Sunnah wal-Jamaah (ASJ), Ansar al-Sunnah, ISIS– Mozambique and al-Shabaab (though it has no connection to al-Shabaab in East Africa). The group is believed to be responsible for more than 3,100 deaths and has displaced over 800,000 people since 2017.

Mozambique is also suffering from severe seasonal tropical cyclones, causing devastating floods. Because of climate change, these recurring storms are becoming more deadly, causing widespread flooding, displacements, damage to public infrastructures, and interruption of essential services. The floods also sweep away livestock and drown fields, destroying the livelihoods of inhabitants and affecting churches. Over the past couple of years, many people have lost their lives due to these cyclones.

Difficult beginnings of the Reformed mission

The early missionary work of the Dutch Reformed Church in Malawi would naturally flow over to the same Chichewa-speaking people living in Portuguese Angoniland just across the border in Mozambique. The Malawian mission station of Mlanda, where Rev. A. G. Murray served, is only two kilometres from this border. Already in 1902, he crossed the border by bicycle, which made him aware of the need to bring the gospel to Mozambique. Mozambique was then a Portuguese colony.  The Roman Catholic Church did not want a Protestant mission in the country, even though there was no mission activity at all in the vast Angonia area with its population of more than 200 000 people.

Rev. A. G. Murray received no reply to his request to start working there. So, in 1907 he travelled to Tête to personally meet with the Portuguese governor who permitted him to start mission work in the area. There would be certain conditions, however. The mission could not be closer than 20 miles from any existing or newly founded Roman Catholic mission station, Portuguese be the language of instruction in the mission schools, and missionaries and teachers all had to be proficient in Portuguese. 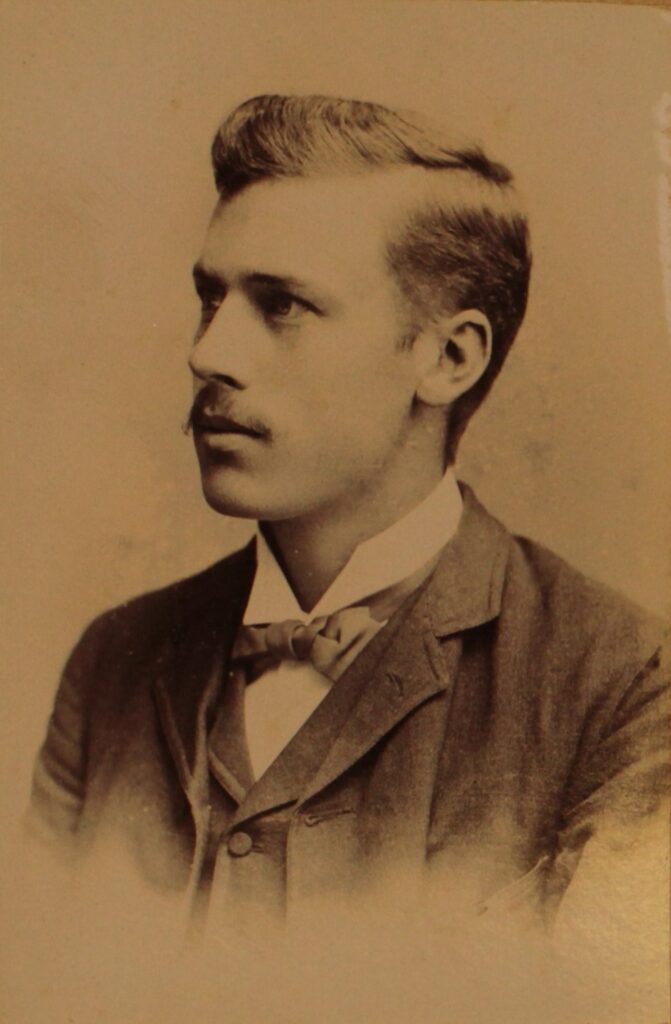 Nevertheless, in June 1908, Rev. A. G. Murray got the necessary permission, and on 19 May 1909, he arrived on the banks of the Chibvomozi River in Tête Province. Here he established the first mission station called Mphatso, which means ‘gift’, to testify to God’s gift after many unsuccessful attempts to gain access to the people in this region. The work progressed slowly. A group of evangelists from Malawi also came to help evangelise the people, and in 1910 the first adults were baptised.

This new missionary venture followed the same missionary approach as Malawi. A school focusing on Bible reading was established, as was a catechumen class in which two young men enrolled (they were the first two converts in 1910), outstations and schools were set up, and elementary medical aid was provided. Some other missionaries followed, and more mission stations were founded, viz., Fulankhungo in 1912 and Chiputu and Bengu in 1914. The Congregation of Mphatso was officially formed on 28 March 1915, with 95 communicant members and 249 catechumens. The Dutch Reformed Church Transvaal, whose Women’s Missionary Guild played a fundamental role in mission work, was called upon to support the mission.

But from 1914, the mission faced resistance again, not only from the side of the Roman Catholic Church but also from political authorities. In 1914 the First World War broke out and caused tension in the region as the connections of the DRC missionaries with political leaders in South Africa were mistrusted. The DRC mission also did not strictly enforce the rule of Portuguese as the only language of instruction but often preferred the local Chichewa language. As a result of these tensions, one mission station after another had to close, and finally, the entire DRC mission was banned from Mozambique in 1922. Thus, the young church in Mozambique was left to fend for itself. From time to time, the faithful crossed the borders to receive the sacraments at nearby Malawian congregations, and the elders took pastoral care of the flock.

After the independence of Mozambique in 1975, the Malawian church sent Revs. P. B. Botha and N. A. Katundu to visit whatever remained of the Mozambican church, and they found it alive and well; it had grown to about 4,000 members! But the communist Frelimo Party, who came into power, nationalised church schools and church hospitals. Churches were closed and Christians were persecuted. During this period, thousands of Christians crossed the border into Malawi for Bible teaching and catechism. 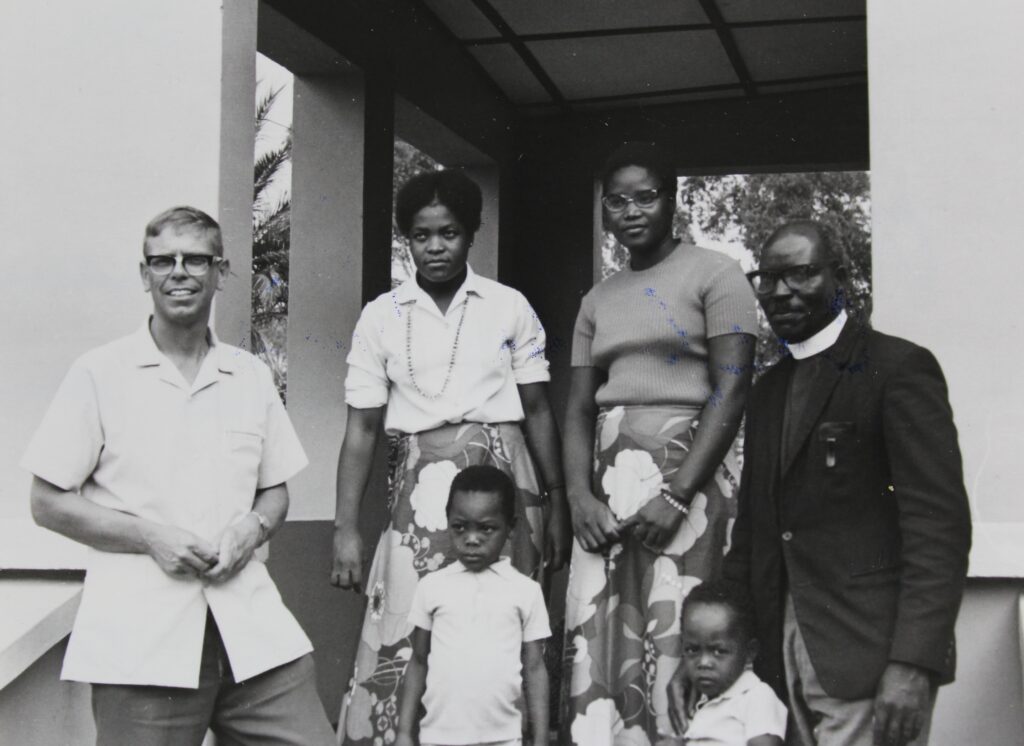 Rev. Pieter Botha (left) with Rev. N.A. Katundu and his daughters with grandchildren

During this time, the elders in Mozambique were supported by letters from Rev. Pieter Botha from South Africa, and they were encouraged to start their own church. After much prayer, the Igreja Reformada em Moçambique was founded in 1977. Three congregants, David Chikakuda, Fanuel Kasamba and Joshua Mlinde were sent by the ‘Group of Nine’ and the ‘Group of Ten’ (who took up the leadership in the absence of pastors) to Zambia (on foot) to be trained as pastors. They were ordained in 1980 to commence with their work in Angonia.

The history of the IRM in the south of Mozambique began when the Dutch Reformed Church in Africa envisioned establishing a Shangaan ministry there. Rev. Pedro D. Tembe was sent out and supported by the DRC in Africa in 1971 to start this work. Rev. Tembe was also an integral part of the registration of the IRM in 1977. He served alone until Rev. Cuamba was ordained in 1984. Revs. Jossitala and Filipe Luis continued the work in the 1990s.

The Novo Synod was formed in Maputo on the 19th of September 1996 and consisted of the work in the provinces of Maputo, Gaza, Sofala, Manhica, Zambezia, Niassa and Cabo Delgado. That included the continuation of the historic work as well as a new drive to reach the unreached people groups of Mozambique.

A theological school was started by Rev. Pieter Botha in Rikatla, and Rev. L. Muhlunga was the first student from there to be ordained.

But early in the 1980s, the effects of the Mozambican Civil War were so severe that the rural areas depopulated, and the three IRM pastors of the time had to flee to refugee camps in Malawi while Pastor Tembo went to Maputo.

In around 1985 the church elders from Milange, who were by then serving under Blantyre CCAP Synod came to Angonia to ask if the IRM could go and start evangelizing that part of the country. The IRM leadership accepted the invitation and asked the Nkhoma Synod to send Rev Maranda as a missionary. Afterwards, Rev. Samuel Bessitala joined him and then Rev. Danie Murray.

The DRC family returns as partners

Since the 1980s, Mozambique has started rising from the ashes of 28 years of war; they had first lived through a liberation war and then a civil war. The church played a vital role in rebuilding Mozambique right from the start. In the late 1980s, the doors opened for missionaries again when President Samora Machel called on churches to assist the government in rebuilding Mozambique. In 1986, Rev. Pieter Botha and his wife, Mrs Jeanette Botha, were appointed as lecturers at the interdenominational seminary in Ricatla near Maputo. Rev. Kobus Minnaar joined the Bothas, and in 1990 he established a congregation at Vila Ulónguè. A new church was built there in July 1991 by the Presbytery of Tulbagh, and Rev. Willie Gouws and Mrs Griet Gouws, his wife, were called to serve there. 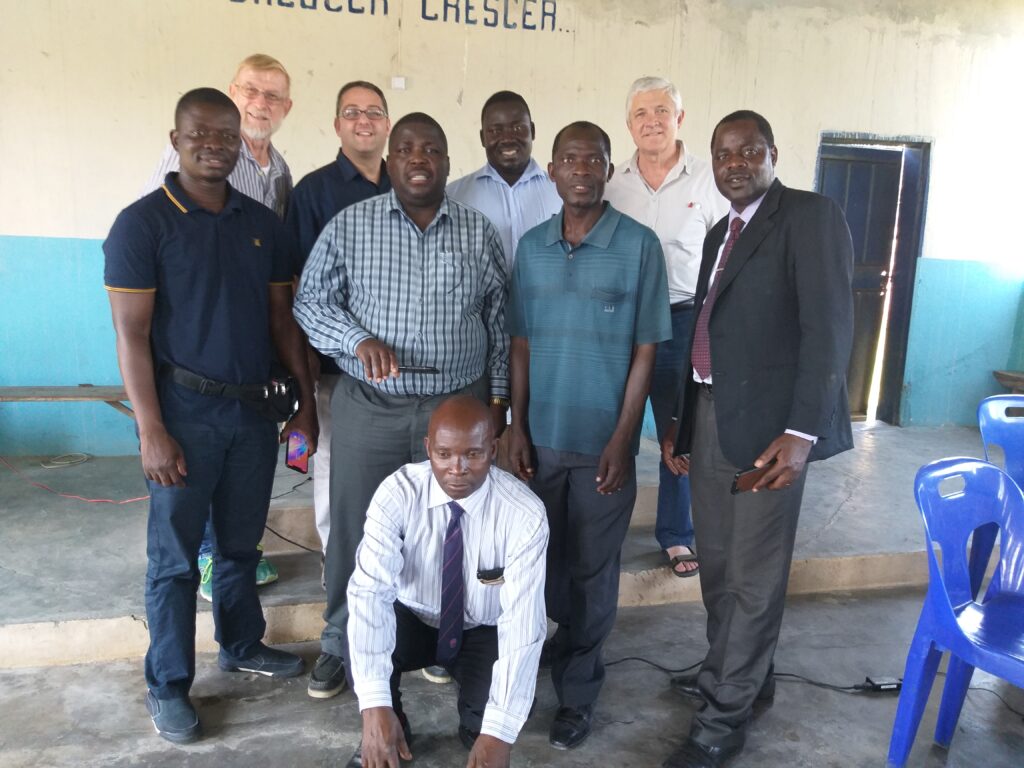 When peace was declared in 1992, Mozambique was officially the poorest country in the world. More than one million died, and about 20,000 children were orphaned. Agriculture and the economy had come to a halt. A cry of desperation resounded from the ruined country: anyone, even Christians, would be welcome to come and help. And so, the DRC family in South Africa took hands with this young sister church in Mozambique and became involved in an almost unreached mission field.

By the grace of the Lord, the IRM today consists of three synods: Novo in the south, Tumbine in the northeast and Mphatso in the northwest, together forming one General Synod with almost 80,000 members, 75 congregations and 86 pastors.

At the moment, the Mphatso Synod has 40 congregations, nine presbyteries, 49 ordained pastors, 45,000 members and 15,000 catechumens. The 7 mission zones are at Gurro, Somgo, Chitima, Mange, Zobue, Doa and Tsangano. There are five pastors in administrative posts.

The Novo Synod has 17 congregations, each with a pastor and several outstations or prayer houses, 20 ordained pastors, 3 missionaries, 3 evangelists, 12,000 members and 2,000 elders. There are 9 missionary zones: 2 in Manica province, 2 in Sofala province, 4 in Gaza province and 1 in Maputo province.

Women play a vital role in the church. The spiritual and physical needs in Mozambique are still huge. Even today, the tension between Frelimo and Renamo is detrimental to the functioning of the church.

However, the church is blessed to have pastors who serve diligently despite the political conflict. Both the Turbine and Mphatso synods are involved in mission projects and reach out to new areas.

The Joint Mission Commission of Mozambique ensures efficient cooperation between the churches of the DRC family that are involved with the three IRM synods: 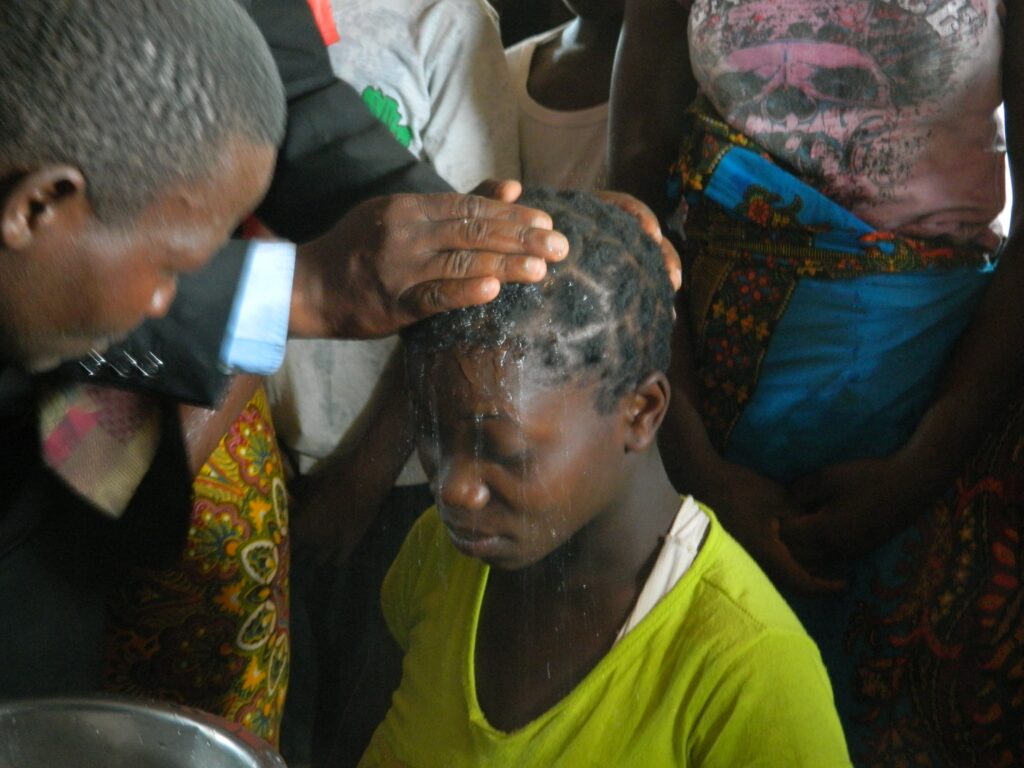 A female IRM member of Tumbine Synod is being baptised.

Some of the biggest challenges are the declining spiritual growth of members and youth, resulting in them drifting away from the church. Long distances between prayer houses also pose a challenge.  Lack of transport for pastors is one of the biggest hurdles to pastoring.  The same applies to the ministries among the children, youth, and women. It is also challenghing for several congregations to be able to support their pastors financially. Fundraising is also not an option for most of these congregations.