The Uniting Reformed Church in Southern Africa (URCSA) is today indeed a multicultural and multilingual church with congregations situated all over South Africa, Namibia, and Lesotho. In terms of membership, it is one of the larger churches with historical ties with the Dutch Reformed Church (DRC). URCSA was formed in 1994 when the much older Dutch Reformed Mission Church (DRMC), already established in 1881, and the Dutch Reformed Church in Africa (DRCA) merged. As a continuation of the older DRMC, it is therefore the second oldest church in the wider (Dutch) Reformed church family. URCSA is characterised by the deliberate embodiment of the Confession of Belhar of 1986. The word Uniting in the name of the church demonstrates that the unification process is not yet completed; URCSA is still striving to promote greater unity, within the DRC family, but also wider.

This historical account of the DRMC focuses mainly on the christening of the so-called “coloured” people. Their history is marked by the blending of the indigenous Khoisan, European colonists, imported slaves from the East, black tribes that migrated from the African interior towards the south and other race groups. Today, the white and brown population groups account for about 8% and 9% of the country’s population of around 60 million, and 86% of both groups call themselves Christians.

The history of the Coloured (Brown) people is not only characterised by suffering injustice and displacement but also by remarkable resilience. It speaks of the confrontation between the first European colonists and the indigenous Khoisan (during the era of slavery at the Cape from the seventeenth to the early nineteenth century), the colonial expansion of European settlers into the interior, and the political system of apartheid during the latter part of the twentieth century. Symbolic of this struggle is the tragic life story of Krotoa (later baptised as Eva) and her descendants.

A brief history of the DRMC’s origin

During the early phase of the Dutch settlement at the Cape, ziekentroosters (comforters of the sick), spiritual workers that were not ordained as ministers, and later some of the first ordained ministers, like Rev. P. Kalden (1695-1707) of the Cape Town congregation of the DRC, spontaneously reached out to the indigenous population and the slaves. Those who converted were baptised and became full members of the existing DRC congregations. This practice was followed for at least a century. 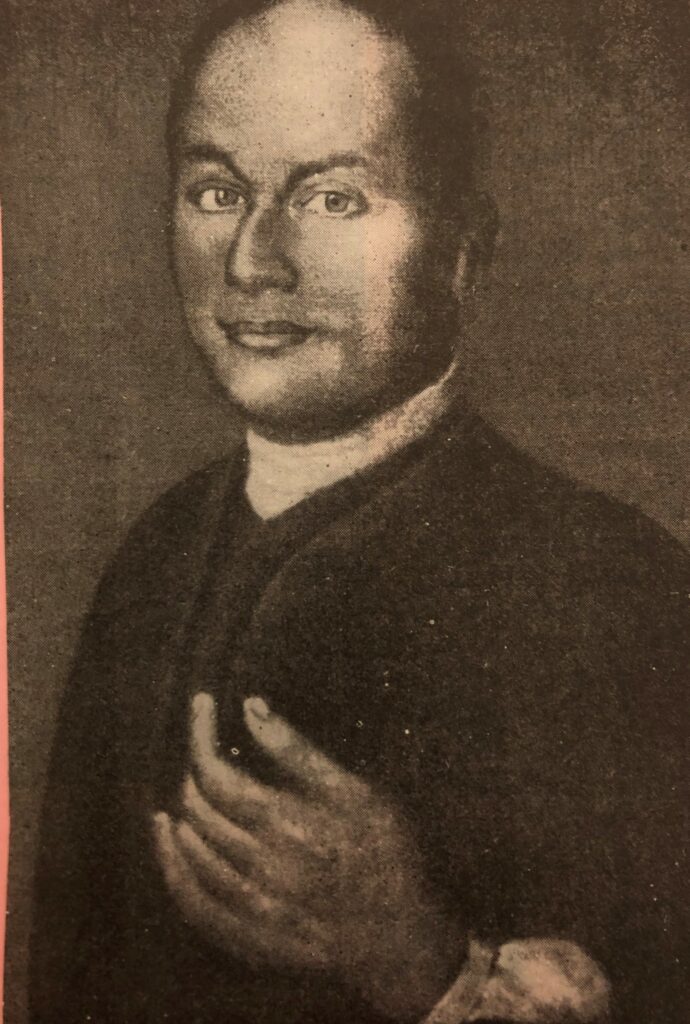 Rev. Georg Schmidt started his work at Genadendal in 1737.

Different mission societies from Europe and America began to engage in deliberate missions among the indigenous population of Southern Africa in the late eighteenth and early nineteenth centuries. The Moravian Mission Society was the first to arrive in Southern Africa. In 1737 Georg Schmidt started a ministry to Khoisan people at Genadendal. In 1799 the London Missionary Society sent Dr J. T. van der Kemp and others to work in the eastern parts of the Cape Colony. They were followed by the Wesleyan, the Glasgow and the Church Missionary Society and other mission societies from Britain, the American Board of Commissioners for Foreign Missions from the USA, the Rhenish and Berlin Mission Societies from Germany and the Paris Evangelical Missionary Society from France and Switzerland.

These organisations were supported by mission-minded DRC ministers like Rev. H. R. van Lier and Rev. M. C. Vos and the widow Machtelt Smit, an influential missionary in domestic and international circles who was a direct descendant of freed slaves. Under their initiative, they founded the South African Missionary Society as a DRC initiative in 1799 and erected a church building on Long Street in Cape Town in 1804. The building is called Het Zuid-Afrikaansche Gesticht (the South African Established Communion) and is one of the oldest church buildings still in existence. In the late 1960s to early 1970s, when the inhabitants of District Six, a suburb close to the inner city of Cape Town, were forcefully removed and resettled at Belhar in the Cape Flats, the Gesticht congregation lost most of its members and, since then, the building is used as a museum. (The current URCSA Belhar congregation retained the name Gesticht.) Numerous indigenous ministries have taken root since this first faith community, alongside existing DRC congregations, but not independent of them. But members of these ministries were full members of the DRC. Until the first independent synod meeting in 1824, the local DRC congregations were governed, and the ministers were paid for by the Dutch East India Company’s authorities and colonial government. The DRC Synod meeting of 1826 decided to send out its first missionary, Rev. L. Marquard. In the next decades, many more missionaries followed, especially after the spiritual revivals of the 1860s and the establishment of the Mission Institute in Wellington in 1877 by Dr Andrew Murray.

In 1857 the DRC Synod made a significant, although controversial, decision regarding separate celebrations of the Lord’s Supper. Some white DRC members complained about the joint celebrations of the Lord’s Supper. Despite acknowledging that, in principle, the Lord’s Supper should be a celebration of the equality and unity of believers in the body of Christ, the Synod decided that separate celebrations could be arranged “for the sake of the weak ones” (the white members who complained). This decision had far-reaching implications. It gave impetus to the notion of racially divided churches and led to the establishment of a separate church for coloured people. In 1881 the first synod of the Dutch Reformed Mission Church (DRMC) convened with representatives of five congregations. This church was not yet independent in that the DRC could veto decisions taken by the DRMC. In those pioneering days of the church, Rev. J. C. Pauw, who served four times as moderator, played a vital role.

The DRMC grew steadily over the years, also when some congregations planted by other missionary organisations like the Rhenish Mission Society, were transferred to the DRMC. The church eventually spread to all parts of South Africa and even into Namibia. It formed a separate identity; it was Reformed, but had distinguishable piety, indicated by the Sionsgesange hymn book, prayer meetings and compassionate work in the communities.

A training school for evangelists and one for ministers were established in Wellington in 1917 and 1929, respectively. The first two ordained ministers from the DRMC were Rev. A. D. Andries and Rev. P. Solomon in 1932. Rev. J. M. N. Breedt (five times moderator) and Rev. C. J. Kriel played pivotal roles in the training of ministers and evangelists in Wellington. In 1965 the training of ministers in Wellington transferred to the University of the Western Cape in Bellville. Several other institutions for education, a church magazine (Die Ligdraer), charitable services like children’s homes, homes for the handicapped, rehabilitation centres for substance addicts and so on were established. Dr H. M. Beets was the first full-time secretary coordinating all the diaconal projects.

The church took the calling of evangelisation very seriously. The first full-time secretary for the Witness Ministry was Rev. J. J. F. Mettler. The church founded its own synodical offices in Bellville South (in Belhar) from where all projects of the synod were coordinated. Rev. D. P. Botha also played a vital role as the moderator during the 1970s and 80s, a challenging period of transformation.

The struggle for a unified church

In 1978 the DRCM followed in the DRCA’s footsteps in declaring the ideal of racially divided churches to be without any Biblical foundation – it was thus regarded as a theological fallacy. However, with young ministers graduating from the University of the Western Cape, some of whom also studied overseas, a new approach dawned on the DRMC. The approach was characterised by an urgent struggle against apartheid, as imposed by both the state and the church. The DRC family had to be reunited! Thus, in 1982, the World Reformed Alliance, an international ecumenical body of which Dr Allen Boesak was the moderator at the time, decided to declare a status confessionis regarding apartheid. Apartheid was seen as a heresy threatening the very core of the gospel. Later that year, in the context of the turmoil of the struggle against apartheid in the 1980s and 1990s, the DRMC Synod drafted a concept confession that was officially accepted in 1986 as the Confession of Belhar. It confesses that the church belongs to the Triune God; that the church of God is and should be one, but that there must be space for diversity within this unity; that God has called the church to be a reconciled community compelled to bring reconciliation amongst division and hatred; that the church should imitate God in seeking compassionate justice and standing with the poor as well as with those in need and those who are wronged; and, finally, that the church should obey God rather than human authorities.

The Confession of Belhar (“a cry from the heart”) became very precious to the DRMC. It became the basis for the unification of the DRCA and DRMC to form the Uniting Reformed Church in Southern Africa (URCSA) in 1995. However, the DRC and the RCA declined the invitation for joining the unification, and some DRCA congregations failed to complete the process in the 1990s. 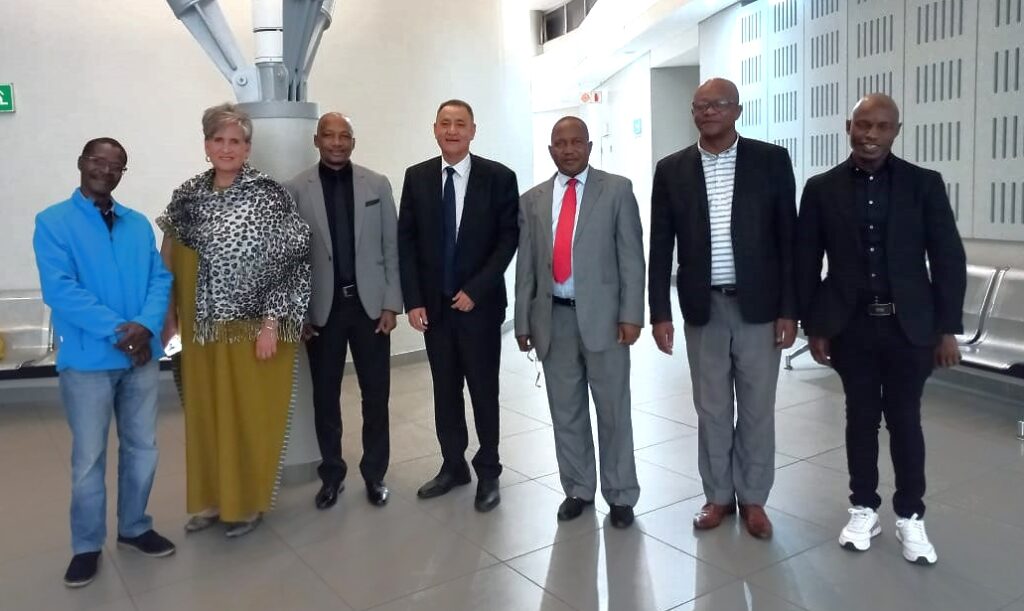 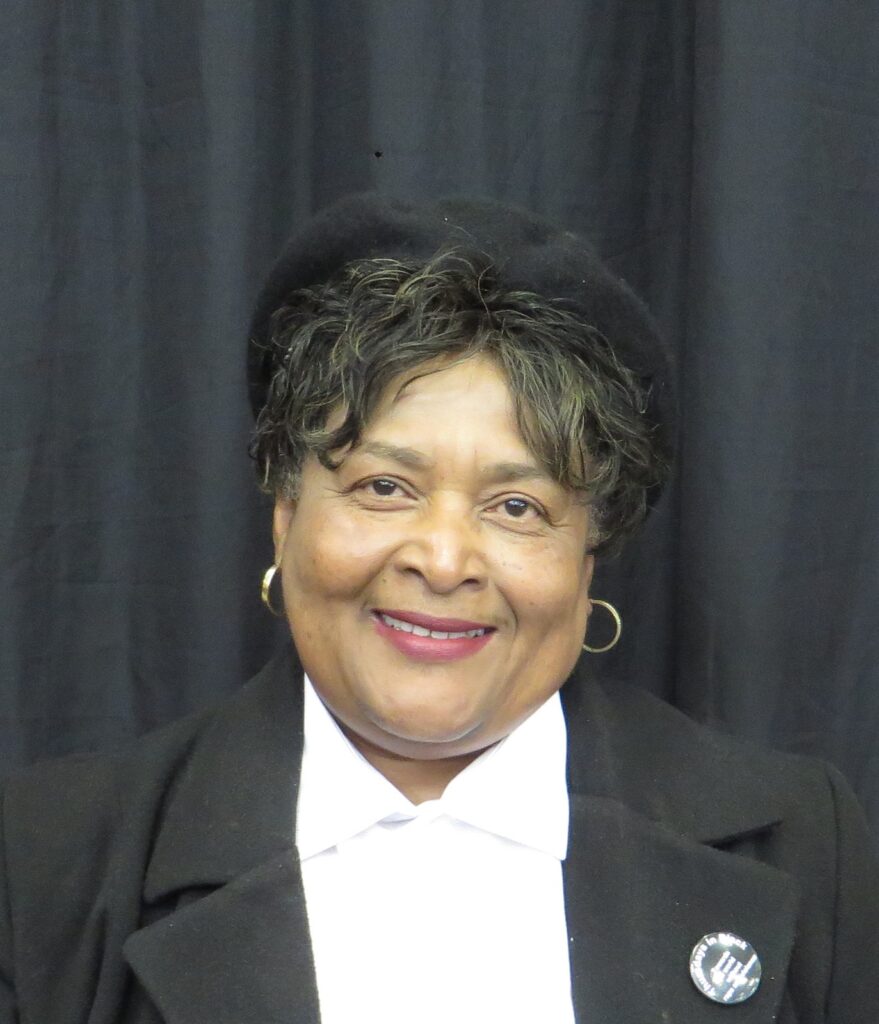 Over the years, URCSA established various institutions such as the Minnie Hofmeyr College for social workers, the New Hope Centre for people with hearing disabilities, the Nannie Home for young mothers, and the Toevlug Centre for Alcohol and Drug Dependence, etc. All these institutions merged into Badisa, a non-governmental organisation jointly administered by URCSA and the DRC Western and Eastern Cape synods. 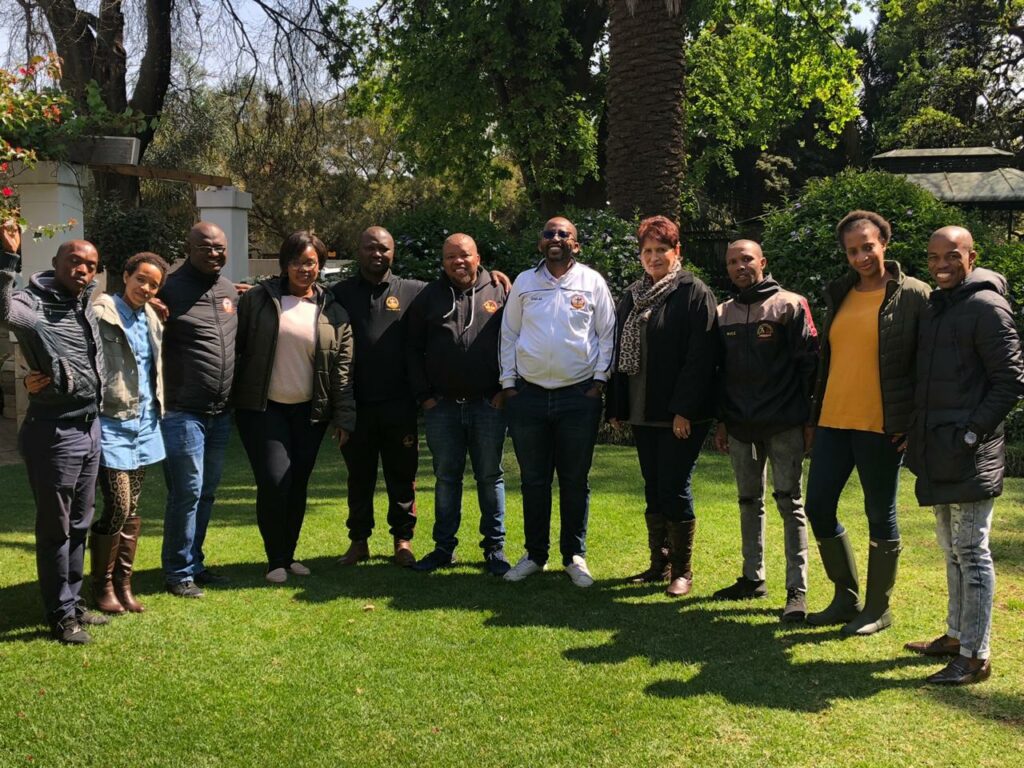 In a recent strategic plan of URCSA, eight focus areas have been identified:

URCSA congregations, presbyteries and synods must deliberately work towards greater unity while simultaneously making space for and celebrating the diversity of its members. A programme to assist congregations with this focus area has been launched. Ministries and institutions must deliberately strive to embody the Confession of Belhar.

Workshops should equip ministers for the challenges they face today. URCSA would like to join hands with other Reformed churches to engage with the challenges of ministry in Southern Africa.

The different ministries, movements or guilds often operate in isolation from one another. Greater cooperation is necessary on all levels of church life.

Due to financial constraints, many URCSA congregations are operating without ministers. Many ministers are also serving part-time as tentmakers. Thus, elders and church council members should therefore be equipped to take responsibility for most facets of the ministry. It is encouraged that congregations call ministers jointly and that the more affluent congregations should assist the poorer ones with their ministry.

Because of the financial challenges faced by the church, stewardship, sustainable projects, better planning, and greater accountability are encouraged.

Congregations should be equipped for evangelisation and charitable service. Sustainable socio-economic projects aimed at community development are becoming more urgent. It is vital that poor people discover their human dignity as they were created in the image of God. In this regard, URCSA took hands with the DRC, the DRCA and the RCA in a programme called The Season of Human Dignity.

The service is the centre of the faithful’s community life. Well-prepared sermons and a Reformed liturgy are of paramount importance to the relevance of a church in this world. Members should be equipped for their calling to be disciples in the world. The development of the youth and transformation towards gender equity in leadership is also imperative. 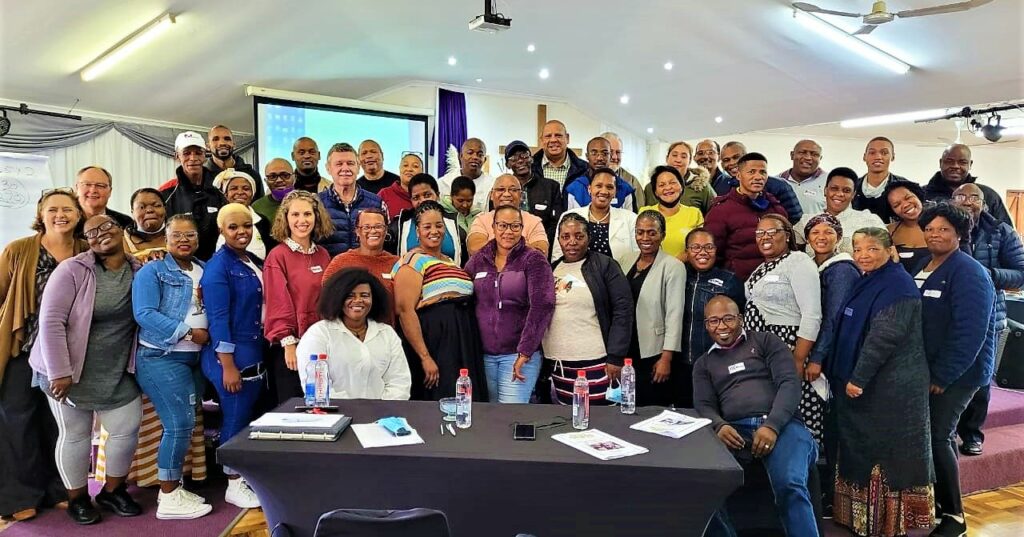 Little Seeds Unit for ECD is a joint initiative of Badisa and Diaconia. Little Seeds renders training for Diaconia, specifically for URCSA presbyteries in the Eastern Cape.

Due to the legacy of apartheid, many congregations could not own property in the past. Many church buildings urgently need upgrading. Congregations and some regional synods need better infrastructure. An efficient system for internal and external communication is also an urgent priority. The URCSA News is distributed regularly.

URCSA is also happy to be part of the Reformed Family Forum, where general secretaries of churches with historical links to the (Dutch) Reformed Church annually meet; URCSA is eager to foster ties with other sister churches in the region.